As the gathering of the heavenly hosts over the fields of Bethlehem joyfully sang, “Glory to God in the Highest and Peace to Men on Earth,” a little angel suddenly stopped singing. Although he was only a small voice in the infinite choir, his silence was noticeable. As angels sing in closed ranks, any gap is immediately remarked.

The singers beside him hesitated and ceased singing as well. The failing of voices quickly spread, nearly silencing the whole choir; the song would have diminished to nothing if not for a 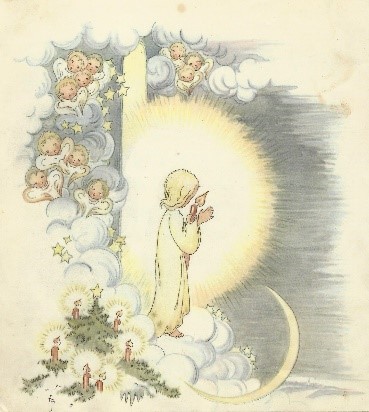 few unwavering archangels with strong swelling voices. One of them looked for the reason for spreading silence.

With a nod of command he indicated that the singing continue and then turned his attention to the little angel.

“Why do you not want to sing?” he asked sternly.

The small angel answered, “I wanted to sing. I sang, ‘Glory to God in the Highest’. But when I came to, ‘Peace on Earth among Men,’ I could not go on.

“Suddenly I imagined the many soldiers in this country and in all countries. Everywhere and always they spread war and terror, killing the young and old, and call this peace. And even where there are no soldiers, there are quarrels and violence, flying fists and angry words between people, and bitterness rules over those of differing ideas. It is not true that there is peace among men on Earth, and I cannot sing against my conviction! I observe the difference between those we sing of and those on Earth. This difference is too large for my feelings, and I can no longer stand this contradiction.”

The archangel studied him in silence for a long time, engrossed in thought. It was as if he was listening to a higher directive. Then he nodded and began to speak:

“It seems that you suffer from the conflict between Heaven and Earth, between the high and the low. So know this: That this very conflict was bridged on that night. This child, who was born and whose future you are worried about, was to end the conflict and bring peace to all the people of the world. That is why we sing, even though people do not yet hear and understand this mystery and all its implications. We do not drown out the conflict with our singing, as you might think. We sing a new song.”

The little angel exclaimed, “If that is the case, I am happy to sing.”

The archangel shook his head and said, “You will take on another service. You will not go back up with us. From today, you will carry the peace of God and of this child to the people. You will be on the road day and night. You shall knock at their homes and put in their hearts their longing for him. You have to be prepared for their defiant and lengthy negotiations and enter into the midst of the clutter of opinions and threats. You have to expose their hypocritical words and make others suspicious of such false arguments. They will show you the door, but you will sit on the thresholds and wait tenaciously. You have to take the innocent under your wing and forward their cries to us. You will not have anything to sing of. But you will have much to cry and complain about. You asked for this. You love the truth more than the praise of God. This feature of your being now becomes your mission.

“And now, go. Our singing will accompany you so that you never forget that peace which was born that night.”

The little angel was at first smaller, and then, without him noticing, he began to grow larger and larger. And then he set foot on the fields of Bethlehem. He walked with the shepherds to the child in the manger and opened their hearts so that they understood what they saw. Then he went into the wide world and began his work.

Challenged and wounded again and again, he has been doing his duty ever since, ensuring that the yearning for peace never disappears, but grows. This yearning troubles people, urging them to seek and create peace. Those who open themselves to him and help him suddenly hear – as if from a distance – a chorus, which encourages him to continue the work of peace among men.

We hope you enjoyed our little angel story and you also read between the lines as well.

To all readers of our website, we wish you a Merry Christmas and a healthy 2020.

Thank you for your continued and ever-growing support.

We wish you peace.