First of all, many thanks to all who continue to follow Andreas’s website with great interest. Several requests have been made regarding Andreas’s flight logbook in particular, so we would like to explain it in more detail.

At the end of 2013, after successful completion of his pilot training at Lufthansa, Andreas joined Germanwings, a subsidiary of Lufthansa, as a co-pilot. In the meantime, Eurowings (also a Lufthansa subsidiary) has assumed responsibility for Germanwings, whose flight operations continue to be carried out under the Eurowings aegis. However, Germanwings will soon disappear as a brand.

Aircraft experts are of the opinion that old does not necessarily mean unsafe, and that 24 years is not unusual for an aircraft. However, it is acknowledged that these machines become more vulnerable and more maintenance-intensive with increasing age. But then the tightrope walk begins: more intensive maintenance results in longer downtime; on the other hand, carriers are continuously under pressure to remain profitable, and an aircraft on the ground earns no money.

As part of our expert’s (van Beveren) activities, our son’s flight logbook was reconstructed.(2)

The complete flight logbook can be found at:
https://andreas-lubitz.com/wp-content/uploads/2017/08/Andreas_Lubitz_pilot_logbook.pdf
A flight logbook indicates the date on which a pilot traveled, on which routes (RTE), and with which aircraft (CALLSIGN and REGISTRY). Also, unusual incidents are recorded in additional columns (REMARKS / RESEARCH RESULTS / EVENT MENTIONED IN MEDIA) and (OFFICIALLY DISPLAYED EVENTS IN AUTHORITY DATABASE).

In the following some explanations: 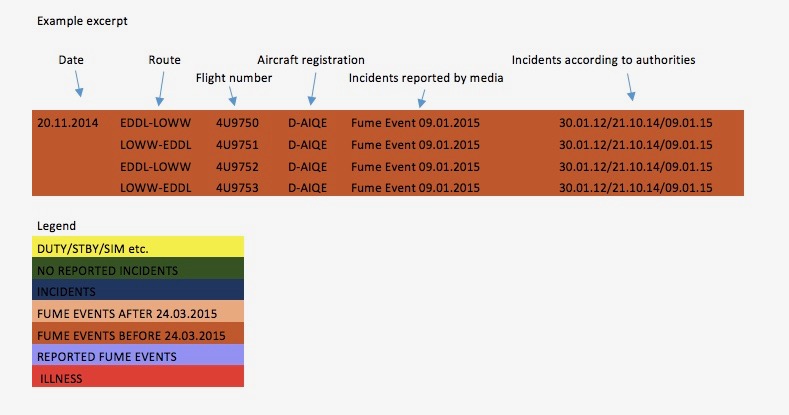 The analysis of Andreas flight logbook shows that he was mainly deployed on planes that had a high frequency of fume event incidents (3) (88% of his flights). Kerosene (fuel), hydraulic fluid or de-icing fluid become toxic fumes, which result from a defect in the engine, and are passed into the air-conditioning via the bleed air system, and thus into the cockpit and passenger cabin. There are fume events in which there is clearly smoke or a noxious smell, but this is not always the case. If this contaminated air is inhaled by individuals who do not quickly degrade these toxins there can be a profound health impact, including insomnia, vision disorders and damage to the nervous system.

Almost all these symptoms were diagnosed in our son, as well as confirmed by pilots (2016) who remain unfit to fly due to irreversible, neurological damage related to such fume events (of course, passengers are also affected). Not all of them recall experiencing a real fume incident, and it could be that some have become ill as a result of the chronic stress in the execution of their profession.

In order to make a clearer determination, we had our family DNA profiles tested, with the result that there was a very high risk for Andreas to belong to the group of people who catabolize the toxins only with difficulty and over time, or not at all. We were surprised and shocked by these results and their relevance to Andreas, as well as in regards to our own health risks. Several family members have been advised to avoid air travel due to this information. Unfortunately, we did not know until 2016 about the possible occurrence of such toxins in the cockpit and cabin. Most of the doctors we have since talked to have never heard of such fume-related health risks. Therefore, it is not surprising that patients suffering from fume event symptoms often go undiagnosed and sometimes improperly treated. The doctors are not to blame for this lack of knowledge, but that the problem exists is confirmed in the following articles in the trade press (mainstream media unfortunately avoid this topic):

It seems that now, slowly and quietly, steps are being taken in the right direction. But this reality clearly affects all who fly and they should give serious thought to this topic.

Moving beyond the truth with twisted facts

An experienced lawyer should give his clients good advice. But what lawyer Elmar Giemulla said in the report of 23 September 2017 in the Berlin Morgenpost (among others) does not correspond to the truth and arouses false hopes among the victims’ relatives. For example, in the article Giemulla states, “His (Lubitz’s) training with the flight school in the US state of Arizona could only be completed through special dispensation because of severe depression.” (1)

The fact is that Andreas was treated for depression from November 2008 to April 2009 . After his convalescence, he was invited to return to Lufthansa Flight School in Bremen, Germany, to attend a new course starting on 01 September 2009 to finish his theoretical studies. In July of the same year, his system was clear of medication and Andreas was healthy, both of which were confirmed after careful examination by several specialists.
Only through this process was he able to continue his education at the Lufthansa Flight School in Germany. The BEA final report substantiates this; below see page 16 of the English version: (2)

Also… “During his training and recurrent checks, his professional level was judged to be above standard by his instructors and examiners.”

Thus the assertion that because of severe depression Andreas could only complete his training with special dispensation is completely absurd and out of thin air. The reality is that Andreas never had any special dispensation, though his former depression was noted in his records. Indeed, both Lufthansa and the flight school in Arizona very thoroughly checked Andreas’s health before he resumed his training.

We will address this whole issue further in a coming article.

It is understandable that Mr. Giemulla is now under pressure because the lawsuit (which was based on misrepresentation) was rejected in the US. It can also be assumed that he has studied the crash investigations as well as the BEA final report. Perhaps he should study both carefully again and not suggest to the victims’ relatives the notion of an undiscovered ongoing depression in order to raise their hopes for substantial immaterial compensation.
One should not distort the facts in order to achieve a desired result.

A final note is in order: After the press conference in March we were told that the relatives could not rest because we were again stirring up the whole topic. But it is Giemulla who had nothing more to do than to inform the DPA about his “latest” version of the lawsuit. And there are other examples we could mention which have stirred further unrest.

As mentioned earlier, in the near future we will discuss in detail the medical history of our son, because there is still a lot to clarify.

Germanwings crash 4U9525: Must the negative image of Andreas Lubitz be regenerated?