Experience has shown that aircraft accident investigations take several years. In case of the Germanwings airplane crash in the French Alps the investigating prosecutor Brice Robin announced after only two days: The copilot deliberately crashed the aircraft. When the captain left the cockpit, the copilot initiated a descent. The copilot did not allow the captain to reenter the cockpit. Prior to these announcements there had been a first listening of the cockpit voice recorder by the French gendarmerie. However, to prove beyond doubt who, in fact, was in the cockpit a voice identification should have been carried out. In order to confirm the identity of the speakers the cockpit voice recorder data should have been played to the copilot’s parents and the captain’s wife. However, this was not done. Instead, it was assumed that the “strong” voice belonged to the captain and the “weak” voice was that of the copilot.

Therefore, it was presumed that it was the copilot who had locked out the captain.
Thus, intentional actions by the copilot were assumed. In reference to the pilot remaining in the cockpit, on page HA 04310 of the investigation report it is documented:

“Listening to the various recording channels revealed that breathing could be detected from a headset microphone, which means that he was alive, although there was no evidence that he was conscious.”

This means that there is no evidence of conscious or even deliberate actions, only that the recorded breathing showed that he was alive.

It was also assumed that the pilot remaining in the cockpit consciously and intentionally initiated the descent. However, the recordings do not reveal any sounds up to the moment of impact that would indicate a pilot’s active manipulations of the aircraft controls.

Various press articles reported that the copilot suffered from depression in 2015.
On page HA 10309 of the investigation file there is a medical certificate from January 29, 2015 – less than two months before the crash – in which the following is certified by a specialist in psychiatry and psychotherapy (see screenshot):

“The patient named above appears to be completely healthy from a psychiatric point of view. There is no indication of a psychiatric disease.
Regarding illness, Mr. Lubitz does not have a higher risk than the average population.” 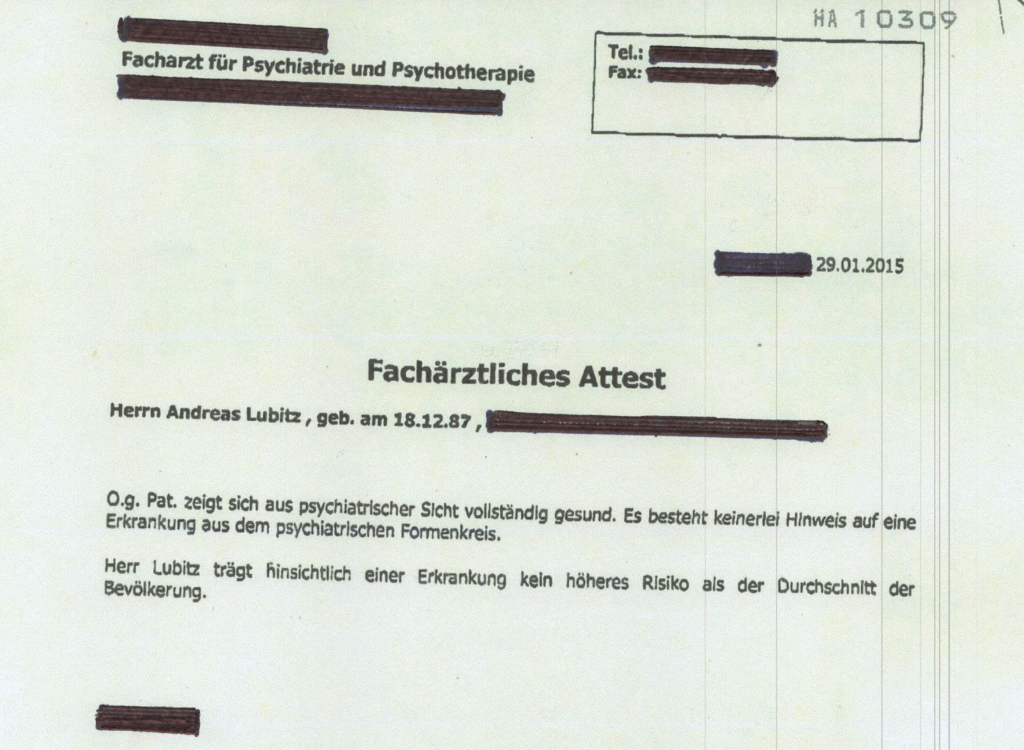 By the constant repetitions of unsubstantiated allegations, large parts of the public have been convinced of the copilot’s guilt and his responsibility for the crash of the Germanwings aircraft. However, this is not reflected in the facts of the accessible investigation reports.

The cockpit door that cannot be opened