Why did this matter receive no attention?

A few days after the crash the public prosecutor assured us that the investigation would continue in all directions. Already during the preliminary investigation, the pro-government / pro-industry press published information found among Andreas Lubitz’s seized documents: a life-support document signed by him on 23.03.2015.

The press chose to interpret this document as indicative of a planned suicide and published this notion. But doesn’t this conclusion lack logic? One only creates an end-of-life-support document when expecting to continue living into the foreseeable future. And one would never expect to survive a planned airplane crash… 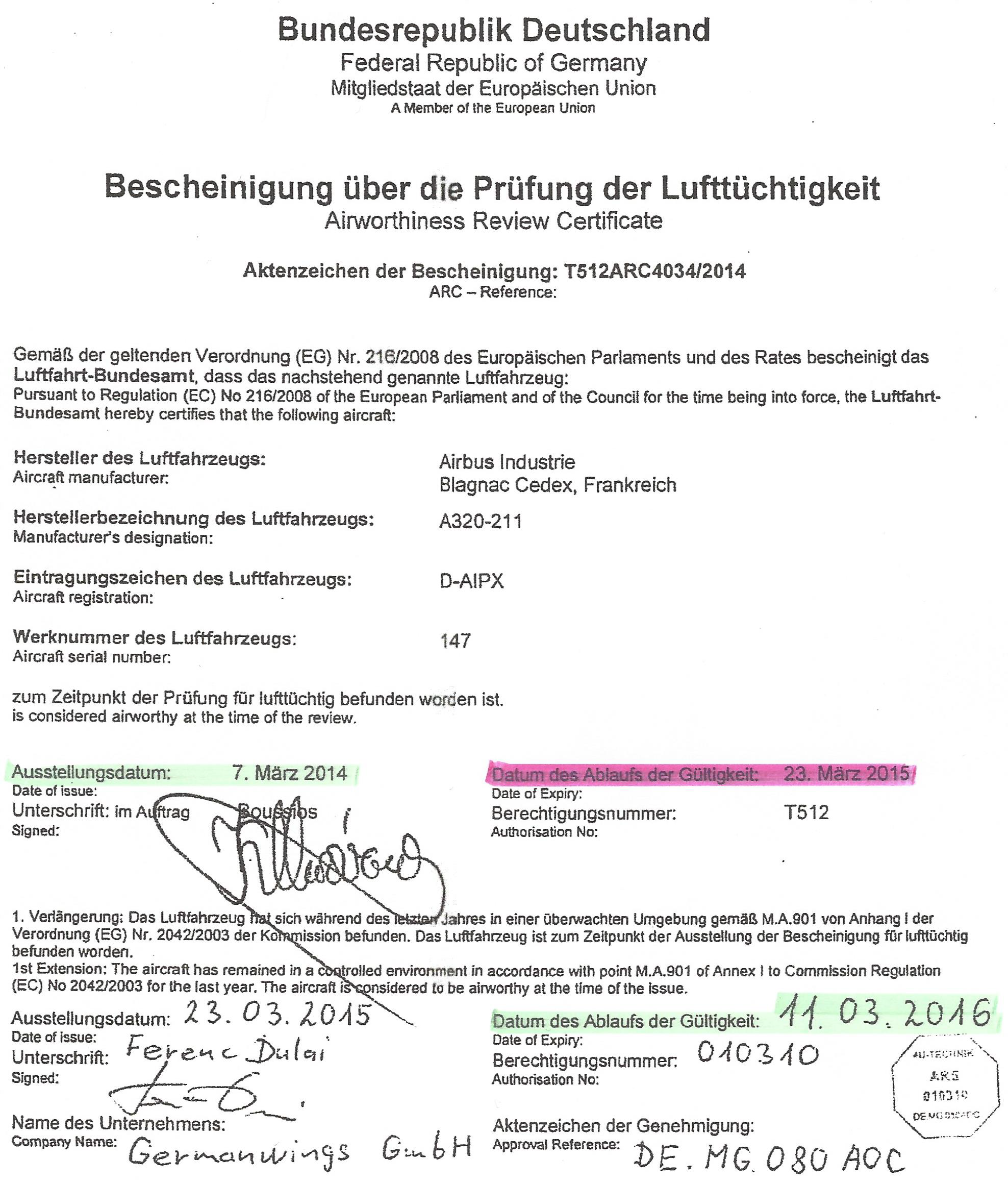 • Under the current Regulation (EC) No 216/2008, an Airworthiness Review Certificate is valid for a maximum of one year.
• The previous certificate had been issued on 07.03.2014 and appears to be valid until 23.03.2015, i.e. until the day before the accident, so more than a year.
• There are certain special conditions for certification extension. However, such an extension is unusual – here, 16 days – and, strangely, at the time of the document’s issue in 2014.
• Apparently, the certification document with the LBA authorization number T512 was typed by the aircraft examiner, allegedly a Mr. or a Mrs. “Boussios”. However, the signature under this name does not match.
• According to the document, the certification took place on the day before the accident and was signed by Ferenc Dulai for Germanwings GmbH. The subsequent certification was to have been 11.03.2016 – 11 days before the allowable one-year expiration.
The curious 16-day extension beyond the one-year deadline was thus almost “compensated” for by the shortened time span before the next certification on 11.03.2016.

These discrepancies could have been checked through interrogations of the maintenance staff and those who were responsible through their signatures. Throughout the investigation file there is no evidence of the questioning of these people. From all this, it can be concluded that apparently the one document (the life-support statement) is given more importance because it supposedly implicates Andreas Lubitz as the culprit. The other document is “overlooked” in the file jungle, in order to shield…

Investigations in all directions? Clearly not.

Considerations on the 2017 press conference